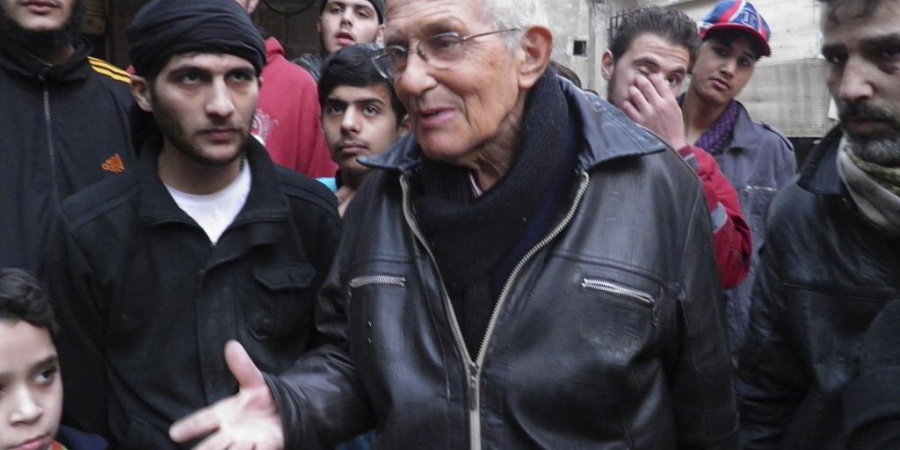 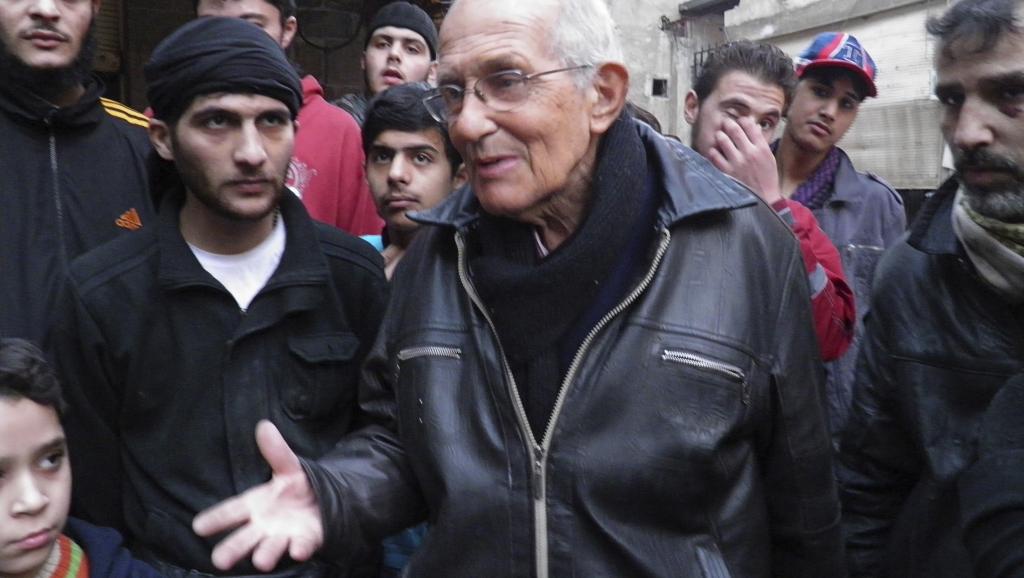 The 7th of April 2017 coincides with the 3rd anniversary of the assassination of father Frans Van Der Lugt, the 75 years old Dutch Jesuit priest who dedicated more than 50 years of his life to the people of Syria. Born in Netherland in 1938 into a bankers’ family, he studied theology, philosophy, psychotherapy and Arabic language, then moved to Syria in 1966 to live there the rest of his life. He was brutally murdered by a masked gunman on 7 April 2014 at the Jesuits Residence in Bustan al-Diwan , in Homs, Syria.

When civil war broke out in the country in march 2011, the old city of Homs including the Christian quarter of Bustan al-Diwan, where the Jesuits Residence was situated, fell into the hands of the Islamist rebels, and was soon besieged by the Syrian army. Ft. Frans chose to stay in the besieged enclave, under nearly daily bombardment and sniper fire and to share the suffering and ordeal of both Christians and Muslims. “The Syrian people have given me so much…I want to share their pain and their suffering” He said.

During the 3 year-long terrible siege until May 2014, all supply had been prevented, nor had people been allowed in or out. Ft. Frans was desperately trying to make ends meet. Traversing the streets and alleys of the phantom enclave by bicycle or on foot, he would visit the traumatized, sick and starving inhabitants offering psychological counselling, support and some bread, water or bulgur if could be afforded. He sheltered the displaced shell-rocked families Muslim or Christian in the Jesuit Residence and made a number of videos demanding the international community to urgently address the human tragedy in the besieged enclave. “The Residence had become a center for reconciliation thanks to him” says father Hilal. Shafiaa al-Rifaei, a displaced Muslim mother who found refuge in the Jesuit Residence, told AFPTV: “He would provide us with foodstuff, children-milk and would always comfort us saying this would soon come to an end. He started small parties for children and gave them sweets and presents …” Another man told The Daily Star reporter “He took my sick father on his bicycle to the (makeshift rebel) hospital despite the bombing”. Frans made no distinction between religions: «I don’t see Muslims or Christians, I see above all human beings.”

A psychotherapist and a serious Yoga and Zen practitioner

Years before the beginning of this appalling war, hundreds of people from Homs and elsewhere in Syria, would come to the Jesuits Residence in Bustan Al-Diwan seeking help and counselling. «As a psychotherapist and a serious Yoga and Zen practitioner, Abouna Frans (as he was fondly called, abouna meaning father) has helped hundreds. He has never turned down a person.” says Abdel-Messieh a psychiatrist of Syrian origin living in Lausanne (Switzerland). “For years I have taken part in his various youth activities. I was amazed how he could always find time to listen patiently to everyone in spite of his very busy schedule. He must have slept only two or three hours a day. He was an exceptional man and priest!”

Ft. Frans was a great lover of Syria. In 1981 he initiated the first [Al-Maseer] The Hike: a “pilgrimage” through the Syrian desert and mountainous areas, held in summer or winter, eight days a year. The objective was to discover the beauty of Syrian landscape and to live an experience of sharing and solidarity: “At the end of every hike… We notice that there is no one not loved.” said he. For thirty successive years, he led the groups of hikers through the arduous and ragged paths and tracks reiterating his well-known slogan “Move forward”. Thousands of youth of all faiths and from all parts of the country took part in this celebrated event. At his advanced age he looked more energetic and dynamic than the youth. The hikers drove strength and stamina from him. “Abouna Frans was a spiritual mentor and father to all. A profound source of hope and compassion.” says Marwa, a resident of Bustan al-Diwan until 2011, now living in Vienna, Austria.

In 1991, he confounded [al-Ard] The Earth Center, on an area of 23 hectares of land, not far from the city of Homs. An unprecedented project of rural and social development, aiming at rehabilitating people with mental disabilities, combating rural depopulation and migration as well as providing a lieu for spiritual retreat and interfaith dialogue. The name itself [al-Ard] (see video above in Arabic) is significant, it empathizes man’s connection to land and environment as a unifying bond.

In a society sharply divided ethnically and religiously, Ft. Frans helped to build bridges and to find common grounds based on human values. “He was a different kind of clergy, modest, intellectual and non-dogmatic who loved the company of ordinary people. He had the courage to open the windows wide to let in fresh air, that is why he was very much loved by the youth”. “Says Muntaha a longtime participant of Frans’ youth activities, currently living in Lausanne.

The civil war has shattered all Frans’ projects but never his faith nor his devotion for the people of Syria. He had made his peace with God and stayed true to his calling to help the poor the sick and build bridges of reconciliation and peace. Maybe the seeds he planted will take time to grow in a country torn by 6 years of apocalyptic war, violence and hatred. Nevertheless, many has already grown in blossom in Europe, in Homs and in other parts of the world, as is the case with Muntaha, Abdel-Messieh, Shafiaa and with Marwa from Vienna who concludes her testimony overwhelmed by emotions: “Abouna Frans has been the source of my inspiration and integration here . He made me what I am today”.